Saint John Bosco (1815-1888) was born into a poor family in a small Italian town and was unable to acquire an education until he was in his mid-teens. He learned quickly and pledged to dedicate his life to the education of young people!

Once ordained as a priest, John Bosco was sent to serve in the city of Turin, where he set out to establish an educational program for abandoned and needy boys.  He invited them off the streets and provided them with food, clothing, and shelter.  He taught arithmetic, Italian, geometry, and drawing.  He also included the teaching of the faith, confession and daily Mass.  The fine arts, including music and drama, were also a significant part of the child’s formation.  Along with this curriculum, recreation, physical exercise and play were very important.  In this way, he offered a strong and balanced program for the boys.

Notable were John Bosco’s amusing and creative methods of drawing boys to schools.  Besides having great charisma, he was a gifted magician, tightrope walker, and entertainer.  Games were designed to teach certain concepts and skills.  He developed personal rapport with all his boys, loved them as a caring and protective father, and was known for his gentleness and calmness.  His discipline was firm, but kind and patient.  Service and charity to one’s neighbor were key parts in John Bosco’s philosophy.

In 1859, John Bosco founded the order of priests known as the Salesians, who run private boarding schools for high school boys even today. Later, similar schools were established for girls. 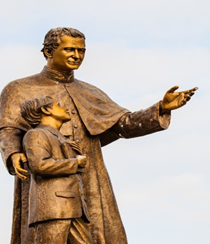 O glorious Saint John Bosco, who in order to lead young people to the feet of the divine Master and to mould them in the light of faith and Christian Morality didst heroically sacrifice thyself to the very end of thy life and didst set up a proper religious Institute destined to endure and to bring to the farthest boundaries of the earth thy glorious work, obtain also for us from Our Lord a holy love for young people who are exposed to so many seductions in order that we may generously spend ourselves in supporting them against the snares of the devil, in keeping them safe from the dangers of the world, and in guiding them, pure and holy, in the path that leads to God. Amen.